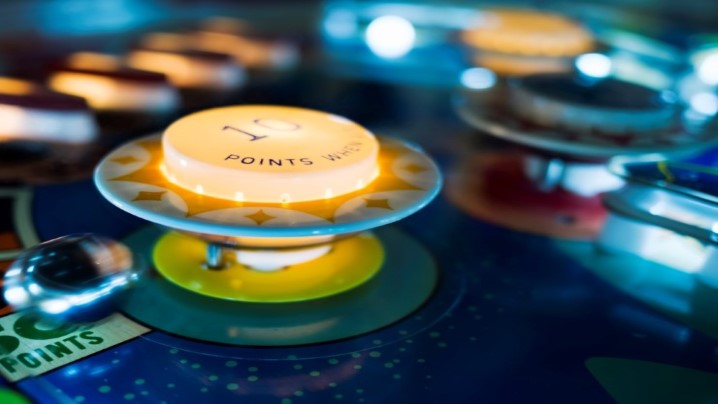 We’re team Audio Talk: John Corn, Vinit Shah, and Alec Galambos. John and Vinit co-operate Cheap Ramen Games, a new indie studio focused on straightforward satisfying  game mechanics, bright and colorful aesthetics and rewarding, juicy UX. I was lucky enough  to work with them on Meow Pow, a frantic couch multiplayer “sports” game (“sports” in the  absurd, Rocket League sense) that has been enjoyed by (let’s say) thousands on Steam and  in arcade cabinet form at Wonderville in Brooklyn, NY. Cheap Ramen Games is in the alpha phase on their new title, so this seemed like the perfect time to distract them with the prospect of making a game with Dolby’s Atmos plugin for Wwise.

I turned to John and Vinit because previous experiences with game jams have taught me  that it’s best to stay focused on something simple and accessible that will leave the developers plenty of time for polish and iteration—John and Vinit have built their studio on  those core concepts. They’re also wonderful to work with; willing to “yes-and” any and all  new ideas, and to wade together in that abstract, hazy place called “design” until some  blend of order and chaos spawns a good idea and a great experience for the player.

Before the jam started, we brainstormed on those same principles: what can we make in a  week that’s fun and coherent, that would also benefit from the surround-sound experience  that Dolby’s plugin offers? We started with pinball, a game that should feel tactile, visceral, and hooked into our deepest dopamine centers. To take it further: spatial audio (and,  more broadly, game development!) helps us create spaces and situations that wouldn’t  exist in our own lives, so—why not surround the player with three pinball machines that  they have to continually juggle?

Of course, playing three pinball machines simultaneously would be absolute madness.  This prompted some deep thoughts: we wanted to strike the perfect balance between  motivating the player and not stressing them out, and also to remind them that time and  attention are precious resources that we all must wield responsibly. …in this case, to play  triple-pinball. In our game, “Okay Pinball” (read however you prefer, but we’re thinking  about it in the pleasantly-surprised sense, as in …Okay..!, Pinball!!”), the two machines  you’re not currently playing are slowed down to an almost frozen state. Each machine has  a “slow-time” meter that can run out; the player must switch to a machine, play it, and  score points to fill its meter back up, juggling all three meters.

This is where spatial audio and Wwise factor in. Armed with a heightened sense of where  sounds are coming from, the player can receive hyper-specific audio information about the machines whose slow-time meters are running low. In Wwise, it’s easy to create “blend  tracks” such that multiple layers of one “piece” of music crossfade between each other in  response to a change in a Real Time Parameter Control (RTPC). In our case, that RTPC is  “urgency”, defined on a per-machine basis; as a machine’s slow-time meter runs out,  urgency increases, and the layers in the music change, get louder, and appear closer to  the player, all but begging them to turn their attention to that machine.

Good audio design is all about balance. If you want something to sound loud, there needs  to be something soft to compare it to. Same goes for the other dichotomies here:  close+far, urgent+calm, in front+behind, high+low. We attempted to create a sense of  space (and therefore, a sense of contrast with the close-up pinball machines) by filling the environment with soft, but omnipresent reminders that you’re in a pinball arcade, or something like it: beeps, whirrs, and mechanical sounds. In the foreground, we wanted the shifting musical layers to draw your ear to the pinball machine that needed playing most. Each pinball machine features a somewhat different piece of music, each broken up into two layers. The three pieces interlock such that they can all play at the same time without causing a horrifying cacophony. Different instruments and flourishes in each (matching three rough “themes”: western, retro sci-fi, and baseball) allow the ear to differentiate between them.

But — spatial audio can easily be overwhelming. The challenge I thought we’d face is the  exact one we did: balancing all the information that comes to the player requires a lot of  testing and nuance, two luxuries not often afforded by a time-delimited jam. We did our  best, though—after tens of Wwise bank commits to source control, we arrived at a minimum-viable product in which it is clear (we hope!) which pinball machine is emitting  which music track, how urgently that machine needs to be addressed, and where it is  (which is to say: which direction you need to swipe in to play it.)

Meanwhile, the machine right in front of you also needs to sound and feel like a great  mechanical pinball machine would: various bumpers, each with different sounds, flippers  that respond to your touch, and a physical ball that triggers all sorts of spectacular effects  upon collision. Vinit focused on building the architectural framework for our game, the  three machines, and the foundation that would allow the game to work on multiple  platforms, while John zoomed in on specific features, not least of which is the juice; the  visual feedback that prompts the player to feel that their actions have weight and  significance.

The result is a game that’s challenging, a little hectic, and filled with color. The music does  indeed let you know when that slow-time meter is running low, but I’d want to turn even more attention to the difference between the three distinct pieces of music coming from  the pinball machines. If they were more unique, and each slightly rearranged using  instruments that represent a broader frequency spectrum (which give them the best hope  of spatializing accurately (go ahead and google “HRTF”!)), they might better draw attention  to the increasing urgency of the relevant machine. This is as much a composition challenge as an implementation one.

The next steps for us here are all about enriching the player’s experience: refining the music so that it feels both dynamic, fun, and true to its design purpose (a tall order!), refining game mechanics so that they’re just challenging enough, and adding some (more) dazzling art, to build on the tremendous progress that John and Vinit have made. Currently, the player is compelled only by themselves: they should want to avoid losing and, like a classic arcade game, rack up the highest score they can. With that basic principle in mind, and given the endless tweakability of our level of difficulty, there are plenty of level design options ahead of us!

I’ve only been working with John and Vinit together for a little over a year, but it feels like  so much longer (in a good way). Their collective imagination manifests in so many ways— creative problem-solving, bold aesthetics, their self-deprecating humor, and more. Our  baseline empathy for each other makes working with each other feel seamless, and  hopefully also translates into some kind of personal connection with the player, which  prompts us to make games that feel great to engage with, and that reward the player for  investing their most valuable resource: time.

To hear more from Audio Talk about Okay Pinball, check out their video.